Migrating a Library from angular-quickstart-lib to Angular CLI

This post assumes that you have an existing library that you’ve built for Angular 2/4/5 and that your library was created using the angular-quickstart-lib from Filipe Silva. At KL&A, we had several libraries that used the angular-quickstart-lib to build and share components among our applications. When Angular 6 came out and the CLI started to support libraries, we made the decision to standardize our builds with the CLI. Since our applications were already running CLI builds it made sense for our libraries to follow suit. The question then became “How do we accomplish this?”

At first, we thought the new  ng update functionality might do the trick but that’s more for migrating application dependencies, not build structure. In the end we did find a way to migrate everything, but it took some trial and error. In this post we will cover the process to hopefully save you some time.

At a high level the process is like so.

Backup The 3rd Party Dependencies Listed in Your package.json

Since your new project will likely need the same dependencies it’s important to back up your package.json. You can make a copy of the file, manually copy and paste the contents into your favorite text editor or just view the file in git, but make sure that you have it handy somewhere.

There are several files and folders that are not needed when migrating your library. Go ahead and delete the following:

Note: We found that the integration folder was typically an exact copy of the demo folder. If that’s not the case in your project, then do not delete this folder yet. We will provide steps later in this guide for copying the differences into the demo app.

Now that things are cleaned up, we need to generate the CLI project on top of the existing code. Our project is called “ngx-kla-bootstrap-form-components” and already occupies a directory of that same name. Some of the other guides I read suggested some shenanigans with naming it one way and then renaming it but we’re going to take a more direct approach.

Perform the following steps in your terminal window (commands provided in GitHub gist below). Remember to change <YOUR_LIBRARY_NAME> to the actual name of your library.

2.    Change to the libraries root directory

By using <YOUR_LIBRARY_NAME>-lib in command #3 we are able to keep our original library name which means no changes in git and no library name changes for our end users.

After running the above commands, you will likely get some errors. On our library we received the following:

Looking at the output, this error make sense, we didn’t tell it to force overwrite those files, so we either need to delete these files, or use -f flag in the ng new command like so:

You should now see output similar to the following: 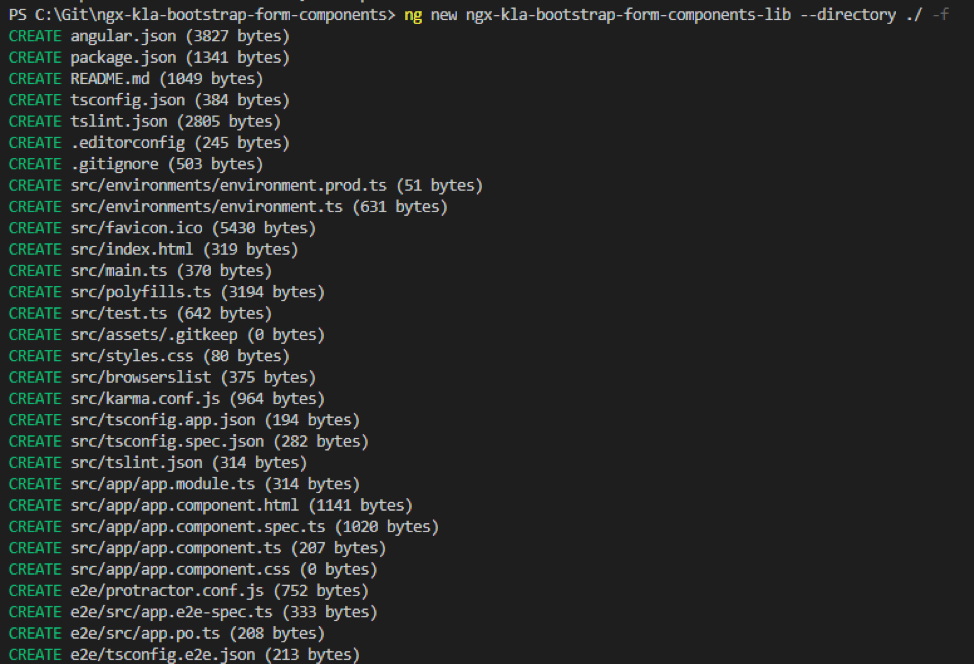 Once the command has succeeded, you should paste those saved dependencies from the first step back into /package.json and then run npm Install again.

To generate a new library using the Angular CLI run the following command:

You should see output similar to the following:

You now have your new library in /projects/<YOUR_LIBRARY_NAME> but currently it’s just stubs. The next step is to remove those stubs by doing the following (commands in GitHub Gist below):

1.   Delete everything in the folder /projects/<YOUR_LIBRARY_NAME>/src/lib

2.   Copy your existing library into /projects/<YOUR_LIBRARY_NAME>/src/lib

3.   Copy the contents of the old library’s src/lib/index.ts to the new projects/<YOUR_LIBRARY_NAME>/src/public_api.ts

4.   Do a find/replace for /src with /lib inside public_api.ts

Build and Test Your New Project

You should now be able to build and test your new library.

To build your library, run the following command:

Since Angular 6 projects use RXJS 6 as well the build command will likely result in errors, it definitely did in our project (See image below). Go ahead and resolve those errors and any others that might have appeared and then re-run the build command.

Once you have successfully built your project, you can delete /src/lib

Get Your Demo App Working Again

The new structure for libraries is just a standard Angular application with libraries in it. This means that your demo app becomes the main app in your project. In order to get your demo app up and running again you will need to do the following:

3.   Copy any static assets into the assets folder in your new project

4.   Update the component selector in your /src/app/app-component.ts from demo-app to  app-root OR update index.html to use your app-components selector. Either one will work, just make sure that they both match.

6.   Add any static assets that are needed for your demo to work to the .angular.json

Your library should now compile and run within your demo app.

Now that our app is building and serving there are a few final things to take care of. First, we need to change the build command in our package.json to the following: